Magic On the Mall With Obama 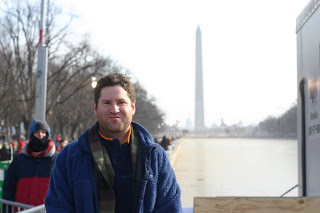 It was special being on the National Mall for the inauguration of Barack Obama. I remember being down there in 2001 for George W. Bush's swearing-in and it was easy to get pretty close, with a paltry 400,000 or so people in attendance.
Figuring it would be silly to mess around with the ticketed crowds near the Capitol, I rode my bike down 16th Street (very few cars, just people waiting for buses), had a leisurely breakfast with friends, and walked down to the west side of the Mall (opposite of the Capitol). We walked around the Vietnam Memorial, the Lincoln Memorial, and settled in at some jumbotrons near the WWII Memorial. The inauguration planners were really smart in placing the big screens along the length of the 20+ block Mall.
The crowds were manageable, yet still impressively huge in number. An overall joyous feeling, the aura of relief for the end of eight catastrophic years for the country, was palpable. People were so happy. Everyone's face was glowing, like all our troubles were about to be lifted. Supposedly there were no, zero, nada arrests on the entire Mall. Obama's words were magic. A great moment to be alive.
Posted by Pop Culture Lunch Box at 11:51 PM