John Lennon: A Life Most Interesting 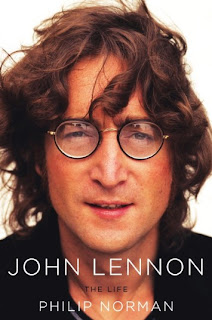 John Lennon was brilliant from the start. By age 5, thanks to his Uncle George picking out particular words for John to learn from the Liverpool Echo, he gained a lifelong addiction to newspapers.
At school, he didn't draw the normal renditions of kitties or his "Mummy." One example was a painting of Jesus, which was "like a psychic vision of himself 20 years into the future."
Because he had bad eyes and hated to wear his glasses, little John possessed "the very Liverpudlian traits of a fascination with language and an irresistible compulsion to play around with it." He often misread words or had a myopic vision of his immediate surroundings. But rather than viewing this as a disability, he turned these flashes into puns, spoonerisms, and double entendres. Once on holiday and near broke, he sent a postcard to his Aunt Mimi saying, "Funs is low."
There are all kinds of great and well-researched stories in this book by Philip Norman. One could ask: What more needs to be said? But no journalist knows The Beatles better or has better access (this book includes in depth interviews with Yoko Ono). So if there's one Lennon biography to read, this is it.
Here's an excerpt about how John's life was transformed by the birth of his son Sean.
I read the first several chapters and will probably finish this epic sometime in the next decade. With juicy new details like Lennon supposedly contemplating whether to have a gay fling with McCartney and an afterword by the heretofore hush-hush Sean, it will be hard not to dig back in.
Posted by Pop Culture Lunch Box at 12:03 PM