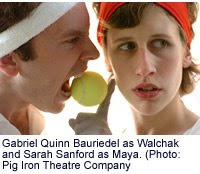 The string continues. I have yet to see a bad play at D.C.'s best theater, the Woolly Mammoth. Hell Meets Henry Halfway is far from the best thing ever on stage there, but if meaningless entertainment is what you're after, this is pretty top-notch.
I have no idea what this was about, but the comic timing was excellent most of the time. The plot had something to do with heaven vs. hell, but probably the plot didn't much matter. One running story line was about a man who comes to visit for the purpose of giving tennis lessons to a woman. Both are pathetic excuses for humans and neither can stand their lives (although they kind of love their own bodies, and each other's).  Very much an angry/funny Royal Tenenbaums feel. Jon, the ball boy, whose relation to everybody else is one of the many mysteries of this play, is a cryingly funny, immature man-child much like Mike Myers' Simon.
The acting is great, although the Prince, for some reason played by a woman, is a terrible and not-funny character. Tim Treanor, who panned Wiener Sausage: The Musical! (admittedly, he attended our one seriously bad show), loved it. He'll give away nearly the entire script for you here.
***1/2 out of ***** stars
Posted by Pop Culture Lunch Box at 5:47 PM