Back to Barcelona with Vicky Christina 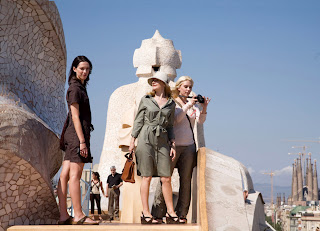 Hey! Rachel, Jackson, and I stood in that same spot on top of Antoni Gaudi's Case Mila last October!
It's certainly partially the Catalan setting, but Woody Allen's Vicky Christina Barcelona oozes romance and passion. It's his best film in many years (and I don't mean that in the same way that the New York Times calls each new Allen movie his best in many years).
The pace and dialogue are snappy. Scarlett Johannson, Rebecca Hall, Penelope Cruz, and Javier Bardem are all hot. The story is kind of sad, bit it nicely shows the complex mix that makes some people so interesting and unpredictable.
This is one of the best movies of 2008, and while Cruz brings the hoopla as the Academy's best supporting actress, the real spellbinders are Johansson and Hall. (Who is Rebecca Hall? She is captivating and unknown. The only thing she's been in is Frost/Nixon, which I should be seeing and reviewing soon).
****1/2 out of ***** stars
Posted by Pop Culture Lunch Box at 9:19 PM