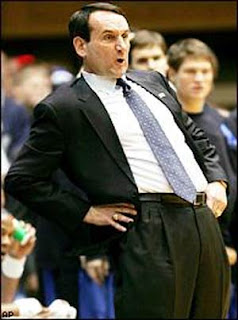 Procrastinating until the end. I have finally filled out brackets for two pools (one with work and one with Georgetown grad friends).
Call me a homer since I'm a big Tarheel fan, but I still think if there's one potentially dominant team in college basketball this year, it's UNC. There has been so much jockeying in the top 10 all season long that it wouldn't be a huge surprise to see any one of a handful of teams win it all.
I pick the Heels to beat Louisville in both my pools, with the final score either turning out 80-75 or 90-75. North Carolina has missed the defense of Marcus Ginyard (out with an injury) all year, and if Ty Lawson can't return from his toe injury in time for the second round, I may append my prediction. Bobby Frasor just can't lead this team to a championship at the point. But I still think this year's team of stars, which finished 28-4 and underachieved to lose in the ACC quarterfinals to a really good Florida State team, has yet to peak.
Tarheel MVPs in order have been Tyler Hansborough, Lawson, Wayne Ellington, Danny Green, and frosh Ed Davis.
I've got Pittsburgh losing to UNC in one semifinal and my only #2 seed to make the Final Four, Memphis, losing to Louisville and Coach Pitino's southern-gentleman white suits.
Posted by Pop Culture Lunch Box at 9:10 PM