Class Struggles with the Best Book of 2006 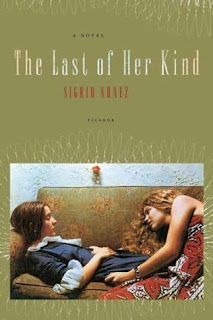 Every once in a while, a novel somehow sneaks its way into your life that seems to be life-changing. The Last of Her Kind by Sigrid Nunez (see my earlier post from when I was just beginning this book here) is one of these.
It's a coming-of-age story about three girls involved in some serious class struggles, with the storyline reaching from 1968 to many years later. Georgette George, from a glum upstate New York town, makes her escape to Barnard in NYC for college. She wants to leave that life behind and does a pretty good job of it. Her roommate, Dooley Ann Drayton, is a wealthy kid from Connecticut who is going the other way. She wants nothing more than to relate to the people who haven't had any silver spoons. Georgette's younger sister also plays prominently. She's a free spirit named Solange (but also goes by the names of Rain and Crash) who runs away to Woodstock and never comes back.
There are plenty of twists and turns, including excellent subplots involving Mick Jagger and The Great Gatsby. The story itself has similarities to Ethan Canin's amazing For Kings and Planets. A good sign.
***** out of ***** stars
Posted by Pop Culture Lunch Box at 9:38 PM