The Many Lives of the Merry Prankster

This is the fourth installment in a series about a book I'm reading called Stories Done, which is a great collection of tales of excess from counter-culture leaders. 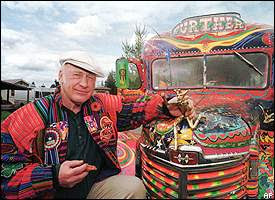 Ken Kesey is a legend in so many ways. Perhaps that's why author Mikal Gilmore has such a difficult time giving him a retrospective in this essay that amounts to little more than the equivalent of a Wikipedia entry (albeit a well-written one).
Kesey became a household name in 1962 with the publication of his novel about a psych ward, One Flew Over the Cuckoo's Nest. He then embarked on a cross-country bus ride (see the actual bus above) with a legendary troupe of Beats called the Merry Pranksters. The ensuing shenanigans were detailed in one of journalism's greatest books, The Electric Kool-Aid Acid Test by Tom Wolfe. These two books should be required for anybody interested in American history (the fun side of American history, that is), as they present entire eras in colorful and graphic style.
Gilmore astutely notes that Kesey was a true bridge between the Beat Generation of the 1950s and the hippie culture that dominated so much of the 60s. Unfortunately, like much else that ended badly in the late 60s, Kesey spend the period on the run from the law and imprisoned for various acts unbecoming to the The Man.
In his later years, Kesey published a handful of lesser novels and notably helped Stuart Brand found the environmental bible called The Whole Earth Catalog. He died on November 10, 2001 due to complications from surgery on a liver tumor.
Posted by Pop Culture Lunch Box at 12:50 PM