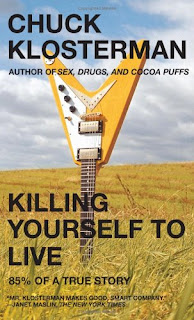 Ever notice how hipsters rarely ever publish any books, or at least any books that are worthwhile? Long-time Spin Magazine writer Chuck Klosterman is one of the rare successful publishing-world hipsters, even if he devotes lots of ink to proclaiming just how unhip he is in Killing Yourself to Live.
Between his constant cool denials (making him ultimately, of course, a true hipster, despite wearing shorts in New York City), he tells some pretty decent rock n' roll stories. Like what it's like to work at Spin. "It is always the spring of 1996 in the offices of Spin. Just about everybody who works there looks like either (a) a member of the band Pavement, or (b) a girl who once dated a member of the band Pavement." 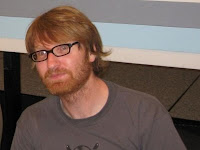 Or like his first relevant story in this book, which is all about Klosterman's trek around the country to visit sites that have something or other to do with rock n' roll death. This stop involves a visit with Stanley Bard, the manager of New York's Chelsea Hotel, where Sid Vicious of the Sex Pistols famously killed his equally low-life girlfriend Nancy Spungen. "I do not want the Chelsea Hotel associated with this story," Bard tells the author. "If you want to understand what someone fascinated by Sid Vicious is looking for, go find those
people. You will see that they are not serious-minded people. You will see that they are not trying to understand anything about death. They are looking for nothing." Klosterman is then asked to leave the hotel, and that's that.
He takes up the death topic because he calls it "the most interesting thing absolutely everybody does," which is probably true. Although I'm a little concerned about pressing on with this book because of its style, I'm pretty intrigued about what this nerdy hipster uncovers. More stories to come, I suppose.
Posted by Pop Culture Lunch Box at 12:38 PM