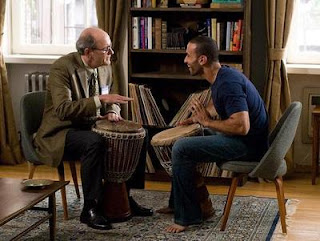 The Visitor (2007) is a great little indie movie that sneaks up on you throughout its 105 minutes. It brilliantly examines the devastating world of immigration detention through the lens of an aging, balding, white American man. Richard Jenkins plays Walter Vale, a professor from a Connecticut college visiting New York City to speak at a conference. He gets more wrapped up in the lives of the immigrant couple he finds squatting in his second-home apartment than he does the conference.

Jenkins has been a great bit player in films like Burn After Reading, There's Something About Mary, amd Hannah and Her Sisters, but here he shines in the lead as someone who isn't what he appears to be. He deserved his Oscar nomination for best actor.

The couple is from Syria and Senegal, and when Tarek gets separated from Zainab, with threats of being deported, Tarek's mother arrives from Michigan to check on the welfare of her son. The cast does an all-around excellent job. The four main players are all so likeable and so good with and for each other that it puts a truly human face on the realities of how U.S. immigration authorities act in cold blood to enforce a set of considerably dubious and frequently unfair American laws.