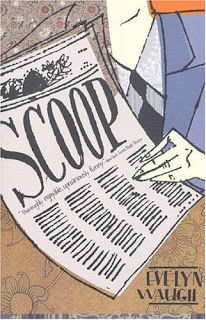 As an ex-journalist and a current director of media relations, I read a lot about the media industry. One book I've always heard kicked around as a "must-read" for those in my profession is a 1938 novel by Evelyn Waugh called Scoop. It's billed as "a satire of sensationalist journalism," so what more could someone like me, who once came close to taking a job at the National Enquirer, ask for? I finally got around to starting it last week, but after about 35 pages, I'm not impressed. It's like the worst of F. Scott Fitzgerald's writings. Dated stuff from the '30s. A fascinating and wonderful decade, by the way.

I'm going to press on because people claim Scoop is hilarious. But, so far, as a Waugh newbie, it doesn't look like his writing has translated well over the years. He was once very popular and, still, his novel Brideshead Revisited (about the spiritual lives of an agnostic family) was turned into a movie in 2008, and Vile Bodies, about decadent London society in the 30s, was made into a 2003 movie called Bright Young Things, with Stephen Fry.

Scoop is about a young man named William Boot, who writes a backwoods column about nature for a national newspaper in . He becomes a foreign correspondent when his editors, who don't recall having ever met him, mistake him for a novelist who also has the last name Boot. He is sent to cover a civil war in a fictional African country named Ishmaelia. Wackiness ensues for the inept Boot, who still manages to somehow get the "scoop."