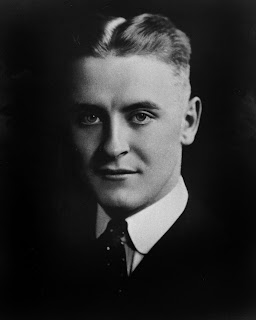 Just to get that taste out of my mouth from my last post on 1930s-era novelist Evelyn Waugh, here are my favorite works by F. Scott Fitzgerald. He's among my favorite authors, along with Hemingway, Vonnegut, Kerouac, Orwell, Poe, and Wilde, to name a few major ones.

04. The Beautiful and Damned (1922). If there's an underrated novel in this powerful four, it's this tale about Anthony Patch, who weaves his way through the fabric of the Jazz Age and his many East Coast elite social circles.

03. Tender Is the Night (1934). Fitzgerald's answer to Hemingway's The Sun Also Rises. It's about the exploits of Dick and Nicole Diver and their (mostly) American ex-pat friends in the South of France.

02. This Side of Paradise (1920). Scott wrote this tale about a Princeton student named Amory Blaine. He and Zelda had broken up and he hoped to win her back by getting his first novel published. It worked.

01. The Great Gatsby (1925). After the Fitzgeralds moved from Great Neck, Long Island, Scott finished TGG while living on the French Riviera in 1925.
Posted by Pop Culture Lunch Box at 11:39 PM