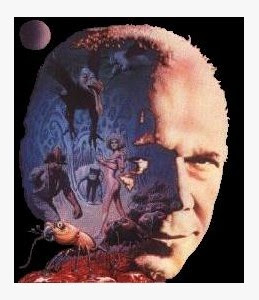 Peoria, Illinois native Philip Jose Farmer died in late February. I had never read anything by him, but was intrigued by descriptions of his Riverworld series, in which everyone who dies comes back to live along the bank of a very long river.

After a little research, I thought I'd test the waters with a highly regarded Farmer novella, "The Lovers," which is supposedly the first instance in sci-fi of a human having sexual relations with an alien. It won a Hugo Award in 1953. And Robert A. Heinlein (who wrote my favorite sci-fi novel, Stranger in a Strange Land) also cited Farmer and the story as an influence.

In "The Lovers," Hal Yarrow is a linguist Earthman who goes with his crew to the planet Ozagen. He rebels against a world of religious fundamentalism by falling in love with and impregnating a female alien. Although obviously tame by today's standards, Farmer is exceedingly creative, especially in his description of how the baby takes shape in the alien's body, and the story and its originality hold up well.