Rachel Lettre, my wife (pictured here telling President Barack Obama how to safely plant a tree) has been planning and running conservation service projects for almost eight years with the Student Conservation Association. This is part two of her series on "friends in high places:" 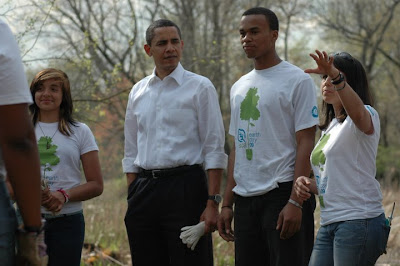 April 17th, 11 a.m.: We rush over to Kenilworth for another site visit, this time we’re greeted by the guys we’ve been working with plus about 10 secret service in suits, press liaisons, and communications people carrying strange bags with wires and mics. This is when I decide I better tell the park staff what is going on, because this was no ordinary-looking group of birders or park-goers. I did pick this park because of the great relationship that we have with the staff and the high level of support SCA gets from them throughout the year. Still, it was awkard telling the site manager that the president would be planting trees in the park in 4 days.

We talk through the plan, where the motorcade may drive in, and also develop the rain plan of planting in the greenhouse. At this point I’m thinking that I should probably tell our high-school volunteers what is going on and get them ready.

April 18th: I still haven’t told the volunteers who they'll be working with! Ran around getting t-shirts printed, continued to keep my mouth shut about the event, and prayed for sunshine!

April 19th: Went to the nursery to look at trees with Amtchat and Jackson. Called 10 nurseries to find plants for the indoor option. Went to Home Depot to buy work gloves. I was buying gloves for the president! And I also had to find something neutral to match whatever Michelle would wear. Not to mention a large pair for big-hands Bill. (Jackson thought shopping at Home Depot was fun and loves saying Obama.)

We then picked up the students and, in the car on the way to the park, told them who they’d be working with. They went crazy! Since we were in 2 cars, the highlight of the day was when they all got out at the park, screaming, jumping, and hugging each other. (Have I mentioned how much I love the students I work with?) We met Leah, briefed the students, walked through the project, and made plans to get them out of school on Tuesday.

April 20th, 9 a.m.: Pouring rain, our final walk through/site visit with White House staff, secret service, National Park Service and my other three SCA co-workers who would be directly involved. This went pretty smoothly. We went over the program for both the outside and inside plans, got confirmation on a lot of questions, and got soaked!

The rest of the day Amtchat and I spent running around getting supplies, buying trees, gathering tools, delivering them to the park, talking to students, having meetings about the program, deciding who was working with each of the "principals" and periodically asking ourselves if this was really happening. Evidentally, according to Amtchat, it was meant to happen, but I haven’t seen The Secret so don’t understand yet.