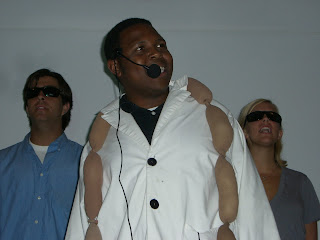 Sean (the one with the wieners around his neck, to the left) takes a look at Funkadelic's amazing "psychedelic druggie album" Maggot Brain:

The title track opens the album, and it owes a great deal to the guitar rock acts of the 60s and 70s. Apocryphal Story Moment: Eddie Hazel was supposedly told by George Clinton to play the guitar solo “like your momma just died.” And Hazel indeed offers a solo so emotionally wrought and powerful that it exists in and of itself. It is truly a testament to what music can be in the hands of a master. "Maggot Brain," the song, even though it is 10 minutes long, is the opening track to my Spring/Summer mix. It’s the perfect way to signal the cathartic end of Winter and the new possibilities of the coming sun. 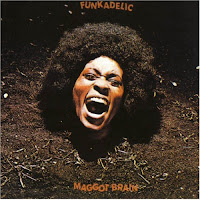 "Can You Get to That" combines funk bass and folk-rhythm guitar with great lyrics, including opening lines: "I once had a life, or rather life had me/I was one among many or at least I seemed to be/But I read an old quotation in a book just yesterday/It said you’re gonna reap just what you sow/the debts you make you’ll have to pay/can you get to that."

After trying to get your mind right, the album brings your ass into the picture. I dare anyone to not dance to "Hit It and Quit It," a thunderous funk jam. The song title hearkens back to a line you can hear on any of James Brown’s albums. Here Funkadelic and George Clinton bring James Brown’s tightly orchestrated funk into the realm of men in diapers, platform shoes, LSD, and UFOs. "Hit It and Quit It" isn’t as tight as JB's stuff by any stretch, but one of the great things about this album is that it doesn’t have to be.

Maggot Brain goes on into the realms of race relations in "You and Your Folks," "Me and My Folks," and even some straight Chuck Brown, DC, go-go style funk on "Super Stupid" (Clinton did spend some early years in D.C. and Virginia). The album closes with the tracks "Back in Our Minds" (note: editor's favorite) and "Wars of Armageddon," the former which belies the drugged-out-haze form that Clinton brought into the mainstream of funk music, and the latter a psychedelic funk jam combining the sounds of the streets (tenements, protesters, police, laugh tracks, and airports?).
Posted by Pop Culture Lunch Box at 9:14 PM