How to Get to Sesame Street, Yo

Muppet Master Jim Henson complained about having a sore throat one night on The Arsenio Hall Show. Shortly thereafter, he had contracted a raging infection (Group A streptococcal pneumonia) that caused him to twice go into cardiac arrest the night he died, May 16, 1990. 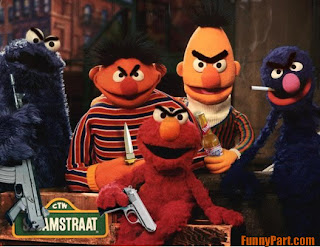 Henson was deeply depressed in the last years of his life, mainly due to the battle he entered with Michael Eisner's Walt Disney Company, which had gained part ownership of the Muppets. Henson believed that they belonged to the world's children and risked exploitation by Disney.
This story begins the new book, Street Gang: The Complete History of Sesame Street
by Michael Davis, a former TV Guide columnist.
The next story is about former reporter Joan Ganz Cooney, whose friends one night in 1967 at a dinner party told her a story about their 3-year-old daughter being transfixed by the television, even when it displayed nothing more than a test pattern early in the morning before the cartoons. She set about inventing something that combined the addictive qualities of TV, education (sorely lacking at this time, other than the relatively successful Captain Kangaroo), and entertainment. Cooney secured money from the Carnegie Foundation, the U.S. government, the Corporation for Public Broadcasting, and the Ford Foundation.
When test audiences rejected the setting of an urban street with trash cans on the curb and laundry hanging on lines, Henson was hired to sketch funny characters like a 6-foot-tall bird, a grumpy trash-can dweller, a Laurel and Hardy-like pair of best friends, and others. This made the city-street scene come alive with color and life. And the rest is history ...
Posted by Pop Culture Lunch Box at 10:42 PM