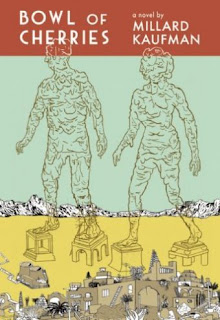 The debut novel by 90-year-old Millard Kaufman, creator of Mr. Magoo, was published in 2007. I decided to start reading it because I was reminded that this is a Dave Eggers' McSweeney's-endorsed book (like if Oprah was cool) by Kaufman's death last month.

It starts with the young protagonist holed up in a crummy jail in the backwater, desert-town of Assama, Iraq. He is set to be executed at any moment by a squad that will prod him off the ledge of a building and down onto a mob below with their spears pointed upwards.
Apparently this jail, like just about everything else in Assama, is composed, literally, of human excrement mixed with sand and glue. The locals "hate to part with anything of themselves" and also use ground toenails for curatives, plaited hairballs for amulets, and urine as a skin conditioner.
Anyway, the prisoner begins pondering his life. His father, Morton Breslau, was an English literature professor at a college in Virginia, where the anti-Semitism of the faculty was as bad as it had been at other colleges in Pennsylvania, Connecticut, and Massachusetts. His father was discriminated against but he was also a jerk. His mother ignored her husband's outbursts and stuck to writing her poetry. She was a large and handsome woman who "could not write her way out of a net brassiere. But she did pack a lot of brisket." One year, when his father didn't receive tenure (yet again), he disappeared into thin air.
That's where my free sample from Amazon ended, but I'm going to keep reading what looks to be a funny and engaging novel.
Posted by Pop Culture Lunch Box at 9:15 PM