No "Doubt" About How Good This Movie Is 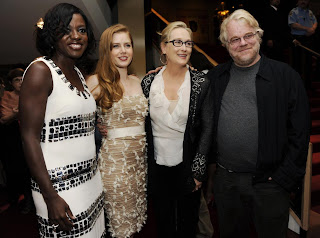 It's a battle for supremacy at St. Nicholas in the Bronx in 1964. Philip Seymour Hoffman as the kind and passionate Father Flynn and Meryl Streep as the cold and bitter Sister Aloysius turn in truly gripping and award-worthy performances. Amy Adams as the young and still relatively idealistic history teacher at the parish is also rivetingly innocent, likable, and a little creepy.
Indeed, all three actors received Academy Award nominations for their performances. The only problem with Doubt is the thinness of the material that Hoffman, Streep, and Adams have to work with. A little more back story on each of the characters might have helped. But then again, it might have distracted from the excellent suspense and discomfort that builds between the characters in almost every scene.
**** out of ***** stars
Posted by Pop Culture Lunch Box at 9:51 PM