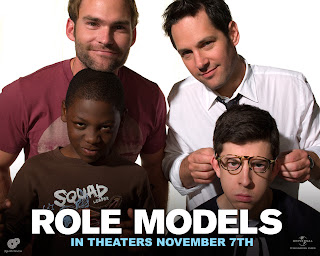 Paul Rudd is pretty unstoppable as a Hollywood comic. He's starred in Wet Hot American Summer (2001), Anchorman: The Legend of Ron Burgundy (2004), The 40 Year Old Virgin (2005), Knocked Up (2007), and Forgetting Sarah Marshall (2008).
Now he has written Role Models, a movie that begins like it could be completely deplorable. But the viewer grows to like all these losers. Danny (Rudd) and Wheeler (Seann William Scott of Old School, Road Trip, and American Pie fame) do a bunch of stupid things while hocking nuclear-green energy drinks to middle schoolers. Elizabeth Banks as Rudd's girlfriend lawyer keeps them out of jail, but they have to perform a month of community service being mentors (or "bigs") to a couple of screwy kids ("littles"). The program, "Sturdy Wings," is run by kooky ex-addict Gayle (played by Jane Lynch from the Christopher Guest spoofs) and populated by other bigs like five-timer Martin (A.D. Miles, who was also classic in Reno 911!).
The kids are great as well. They win you over, despite their nerdy awkwardness and hesitancy over actually needing big brothers.
Rudd's screenplay is wholly original and his trick is to say the things that aren't supposed to be said, but to say them sweetly with just a tinge of vulgarity. And when has their ever been a better glimpse into the world of medieval role playing war games? Role Models is unsuspectingly hilarious.
**** out of ***** stars
Posted by Pop Culture Lunch Box at 11:27 PM