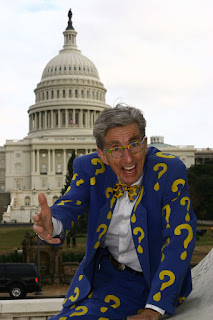 Friday night we were waiting on the sidewalk for a table at the new Takoma Park Napolitan pizza joint called Roscoe's when I said hi to a guy walking down the street. He was dressed in a white suit with orange question marks all over it. His wife was matching in orange.

I said, "That's the question mark guy." Other people standing around didn't know what I was talking about until I said, "I can get you free money from the government." Then I showed them the proof from Wikipedia on my iPhone.

Matthew Lesko does infomercials late at night and has written tons of books that he admits to have plagiarized straight from government guides for grants and loans. I said "hi" and he belly-laughingly and nasally returned the "hi." He apparently lives in nearby Kensington, Maryland.

So that was mildly thrilling.

Even better is that downtown Takoma Park (about a mile from my house) has a really good new pizza place. Wood-fired, thin-crust and not greasy. Now they just need their liquor license. Supposed later this summer.
Posted by Pop Culture Lunch Box at 10:08 PM