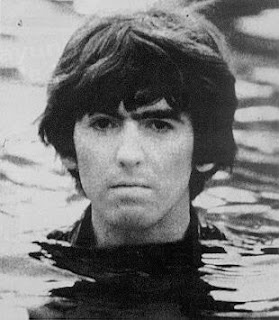 This is the sixth installment in a series about a book I'm reading called Stories Done, which is a great collection of tales of excess from counter-culture leaders.

The price of being a Beatle was great for George Harrison. While he clearly gave the world a bounty of love through the band's songs, the lead guitarist said the experience was "a nightmare, a horror story. All that big hassle to make it, only to end up as performing fleas."

Life as one of the four most popular people in the world (some would dare say even more popular than Jesus) was filled with terror, like the time there were death threats on tour in Japan to the physical attacks on George's first wife, Pattie Boyd, for taking the moptop away from all the single girls of the world.

"The split-up of The Beatles satisfied me more than anything else in my career," George said. He moved on to things he cared more about, like his triple album of tunes stockpiled during the Lennon/McCartney reign and a concert to benefit the poor of Bangladesh, credited as the first of the shows like Live Aid, Farm Aid, and the September 11 concerts.

But despite finally achieving mass success on his own merits, Harrison faced a 10-year battle to get the funds distributed to Bangladesh. He also lost Boyd to Eric Clapton, supposedly because he adopted a religious belief that sex should only be used for procreation

Harrison was lonely, adrift, and depressed through much of his post-Beatles life. When he proclaimed that he was in love with Ringo Starr's wife and allegedly later consummated the relationship, John Lennon "accused him of virtual incest." (George and Ringo stayed friends and George even wrote and played on a huge Ringo hit called "Photograph.") Critics finally bashed George for the first time with his 1974 album called Dark Horse.

There were more death threats against George over the years, the most serious being when a knife-wielding psycho broke into his mansion and stabbed him badly during a wrestling match for the weapon. He had throat cancer. He had a piece of his lung removed. He died of a brain tumor in Los Angeles on November 29, 2001 as a Hare Krishna group chanted a mantra to help with his "migration to death."

Harrison was cremated and his remains were "reportedly flown to India and scattered along the Ganges River and various other holy places in the vicinity."
Posted by Pop Culture Lunch Box at 10:31 PM