Rachel Lettre, my wife, worked with President Barack Obama on an Earth Day tree-planting service project (C-SPAN 32-minute video) following the signing of a national service bill. She works for Student Conservation Association and this is part three of her series on "friends in high places." Also see parts one and two. 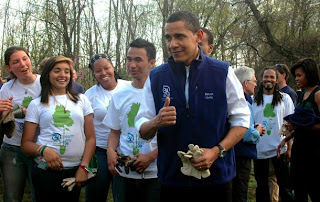 I got to sleep in for a change and didn’t have to be at the park till 9:30 a.m.! Amtchat and I headed to Kenilworth Park and Aquatic Gardens and had a little time to get ourselves organized before the big day began. We arrived to find the National Park Service resurfacing the dirt maintenance road into the park that the motorcade would drive in on. It's amazing how things on the backlogged maintenance list jump to the top and get done when the president is in the mix.

Secret service had infiltrated the park at this point and it made me realize that the prep work done here for a 40-minute event happens wherever the president goes in the world.

Then our prep work began, it started with the arrival of all of the staff from SCA's D.C. office at 10:30 and then the arrival of the 12 volunteers; Dale, SCA’s CEO; Kevin, SCA's communications VP; and Jane, the chair of the board. Mark and David were there representing the White House and there were lots of people from the park service. It was a sunny beautiful day and the SCA staff were thrilled to be out of the office. Everyone pitched in moving tools, mulch, trees, cleaning the greenhouses, running errends, labeling t-shirts, and helping in anyway possible.

During this time I was busy mapping out what would happen during “the event." I drew up a map of the area, labeled which tree would go where, made lists of who was planting which tree, and prepped the students on what they’d be doing. Time flew by. We planted a demo tree with all of the students and volunteers so they’d be ready to plant with the big shots.

The students were great as usual. They laughed, played games, did the boot dance (don't ask, just watch the C-SPAN 32-minute video, where it was again performed), and helped get stuff ready all morning. Lunch arrived and, after we finished eating, the rush began. We had 30 minutes to get everything ready and get out of the park so the secret service could let the dogs run and do the final sweep. We all went out to our vehicles, which had been moved out of the park and onto the streets. I even spent a few minutes putting on mascara on a curb (this never happens before a service project!).

Time for security clearance. We all circled up and Tim, the Secret Service guy read our names off of a list and, one by one, we had our bags checked and had the wand run over us. All clear, except for Justin, whose name wasn’t on the list. Mark from the White House pulled me aside and asked me to vouch for him. He asked Leah to do the same and Justin was in. Phew! While we were waiting to go back in, Leah pulled me aside and gave me the greatest pep talk I’ve ever gotten. I wasn’t nervous at all, just excited.

Back in the park and no time to spare. We went down to the planting site to find the ground totally torn up by the trucks they had driven through, everyone moved in to patch up the mud and make it look a little nicer, but it was really muddy! While we waited, the students were nervous. We went over the greeting again, and everyone had a few minutes to prepare for this opportunity of a lifetime. I double-checked the trees, Amtchat got a pick mattock and dug a hole, the students played big booty, we had a big group hug, a high five, and we waited for the signal.

The motorcade arrived (we couldn’t see it at all from where we were. I really wish I had seen it pull through the neighborhood). And suddenly a rush of men in suits, woman in skirts and heels came running down the muddy road. There must have been 30+ people there, a lot of them press and a lot of them staffers, Secret Service, and all looking out of place in the park! One of the students said she was nervous and I reminded her to look around, that she was totally in her element and everyone else was way out of place. We all got a good laugh.