The Imagination in John Lennon's Artwork 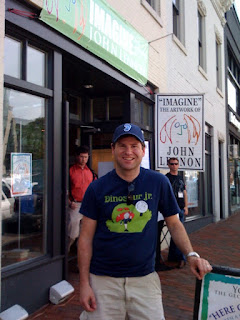 In a 2004 New York Times article, Yoko Ono said, "Every now and then, I discover a drawing in the pages of a book that he was reading, kind of like a quick ad-lib. I have no idea how many drawings there are. I've never done a definite catalog. Sketching was like John's security blanket. The guitar was as well. He was always strumming, but when he wasn't playing the guitar, he was drawing. Guitar and pen."

Lennon's drawings aren't just good because he was John Lennon. We went to a non-profit exhibit today in Georgetown (ending Sunday) called "Here Comes the Sun" that featured more than 100 of the former Beatles guitarist's sketches. Suggested $2 donations went to the Capital Area Food Bank, in the man's spirit of people, love, and minimal capitalism.

Framed lyric sheets from his solo and Beatles years lined one wall. 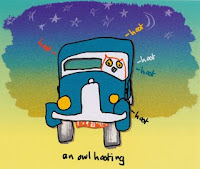 Very cool stuff. Most people think of the simple yet powerful "Imagine" drawing, but, like with his lyrics, Lennon had an amazing way of capturing an era's zeitgeist and his massive personal worldview in many of his artworks, all the way from the doodles to the near-Dali-like larger ones.
Posted by Pop Culture Lunch Box at 11:01 PM