My Friend: The Next Laurence Olivier 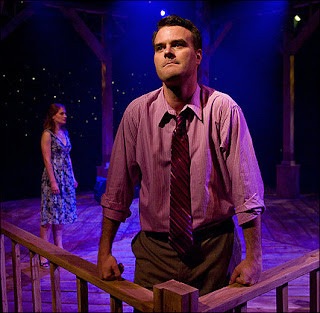 The Washington Post's photo (right) and a glowing article accompany the opening of Pulitzer-nominated The Pavilion at Northern Virginia's new Hub Theatre.

One of my best friends and fellow bandmate in The Sprogs, Tim Getman, has been churning out powerful performances for a long time on the DC (and some on the Chicago) scene. So it was nice to see his photo looming large on the top of Page C5 yesterday. The photo caption says he "gives a superb performance as a man attending his 20th high school reunion."

The article notes that writer Craig "Wright has surrounded his long-estranged couple, Kari (Niki Jacobsen) and Peter (the terrific Tim Getman), with amusingly quirky characters, from a paranoid, pot-smoking small-town mayor to the star employee of a for-profit suicide hotline. When these former Minnesota classmates convene for their 20th reunion at a lakeside dance hall, gossip swirls and blood-alcohol levels climb -- while, on the sidelines, Peter attempts to reconcile with Kari, whom he dumped during senior year in exceptionally brutal fashion."

The Post's reviewer, Celia Wren, ends her article with one last glowing comment about Tim. "Getman's quietly desperate Peter [is] the production's ace card. The actor packs emotion into his deceptively low-key, overeducated-Joe-Six-Pack intonations. And he wrings so much suspense and anguish from silences, you'd think muteness were an actor's key tool."

Overeducated-Joe-Six-Pack? Tim, are you even really acting?

Well, I tried to get Tim to do a guest blog about this show but he sorta blew it off. I can see why. Perhaps a little too big for Monotremeindc ...
Posted by Pop Culture Lunch Box at 2:58 PM