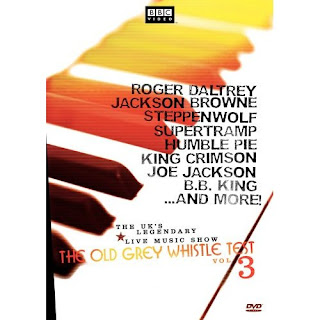 When it comes to listening to music, I almost always prefer studio music over live performances. But then again, live music is something I love to watch. And the Old Grey Whistle Test DVDs is a fascinating way to watch a wide variety of styles of in-studio live performances collected from throughout the British show's run between 1971 and 1987.

On Volume 3, even the terrible performances by PIL, Japan (pictured, right), Joe Jackson, Half Man Half Biscuit, and The Jesus and Mary Chain (a band I normally love) are captivating.

There are a handful of performances by artists I know little about and am encouraged to check out further, including folksters Lindisfarne, Humble Pie with their smokin' soul number "Black Coffee," Janis Ian and her powerful "At Seventeen," and the country-meets-wave of Lone Justice.

True highlights of the DVD include Roger Daltrey's commentary on the ills of the music industry and lamenting on the sad loss of vinyl. His performance of the Leo Sayer-penned "Giving It All Away" is pretty good as well. Jackson Browne, Steppenwolf, The Jam, Freddie King, Orange Juice, the Bangles, and, yes, even Supertramp, are worth the price of admission alone. And there's still more.

This is the kind of show that the world needs. Austin City Limits is about the closest thing, but even it is still way too infrequently aired.