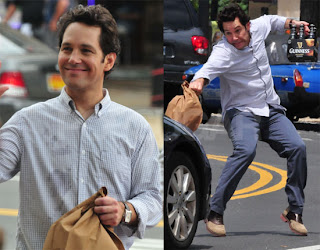 One the way home from Fogo de Chao (Brazilian meats!) and a great movie (The Hangover) last night, Gordie, Zak, Brian and I were driving slowly up 15th Street NW, just south of I Street, and got a nice brief viewing of Paul Rudd and Jack Nicholson laughing and chatting with each other.

They were standing in the spotlights and were either sharing a moment between takes or actually shooting. The movie's working title is How Do You Know? and co-stars Owen Wilson and Reese Witherspoon as participants in a love triangle with Rudd.

Come to think of it, I haven't really bumped into any major movie stars since way back in 2001, when Hannibal was filming in Union Station. Julianne Moore was sitting in a high director's chair by herself and Anthony Hopkins chatted me up (because, it seemed, I was the only person around not trying to hound him; he sort of hounded me). Much nicer guy in person than in character.
Posted by Pop Culture Lunch Box at 2:33 PM