Does George W. Know Obama Is Living in His Old House? 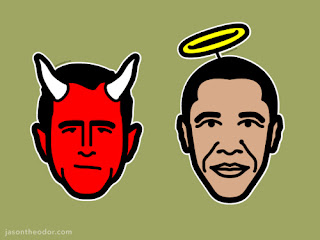 As Barack Obama prepared to formally launch his campaign back in February 2007, President George W. Bush sat in the White House and said he had "no idea who would win the GOP nomination."

But he was absolutely sure Hillary Clinton would be the Democratic nominee. He said it with his feet propped up, Texas-cowboy style, on a glass coffee table. "She has staying power, star power, and money power. She brings a big organization that is well funded right off the bat, and one of the lessons I learned is you have to be able to play the long ball," Bush snickered.

Not surprisingly, Bush was very doubtful of Obama. "Certainly a phenom and very attractive. The guy is very smart." But he went on to say, while "popping an endless stream of peanuts into his mouth," that the primary election process would be rough and that Obama didn't have the experience to handle it.

This is a fun story in the opening of Richard Wolffe's new book, Renegade: The Making of a President. Wolffe, a writer for Newsweek and regular talking head on Countdown with Keith Olbermann, had close access during the campaign.

The candidate was nicknamed "Renegade" by the Secret Service because he "repeatedly broke the rules." Obama had little money starting the campaign, rejected public finance, campaigned overseas, accepted his nomination in a football stadium, spent millions on a prime-time TV show, stayed positive. The list goes on.

I'm not all that enamored of Wolffe's storytelling style, so I probably won't read on past the first couple of dozen pages. But the tale about Bush's predictions was enjoyable. I had forgotten about it among all of Bush's other errors.