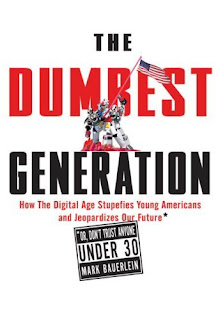 Today's Web-and-not-book-obsessed youth will destroy society. That's alarmist rhetoric and it's what people have been saying for years.

So why am I leading off this article by saying it again? Actually, that's the thesis of self-described "curmudgeon" author and Emory English professor Mark Bauerlein in 2008's The Dumbest Generation: How the Digital Age Stupifies Young Americans and Jeopardizes Our Future, or, Don't Trust Anyone Under 30.

And although he states the obvious, the string of indictments he has for today's gossipy and self-absorbed Facebook generation makes a strong and scary case.

A few of the book's endless stats include:

-- 52 percent of high-school seniors picked Germany, Japan, or Italy over the Soviet Union as a U.S. ally in World War II.

-- Only 41 percent of teenagers can name the three branches of government.

-- Barely half of 15- to 26-year-olds agree that "paying attention to government and politics" is important to good citizenship.

-- In July 2006, only 26 percent of 18- to 26-year-olds knew that Condi Rice was secretary of state and only 15 percent knew Vlad Putin was president of Russia.

-- Of 18- to 24-year-olds, in the past 12 months, only 10 percent have attended a jazz performance, one in 12 attended a classical music performance, only 2.6 percent saw a ballet, and 11.4 percent went to a play. Those numbers have all been dropping over time, despite huge increases in the overall number of performing arts companies.

No matter what political stripe or class, Bauerlein finds that the more young people attend to themselves, the less they remember the past and envision a future. The minds of the young are plateauing at age 18. The small samplings of dummies on Jay Leno's "Jaywalking" segments are no lie and parallel the many, many studies that confirm our collective cluelessness.

"The insulated mindset of individuals who know precious little history and civics and never read a book or visit a museum is fast becoming a common, shame-free condition."

Scary stuff, and a book well worth reading ... at least for the few who still stoop to that sort of thing.
Posted by Pop Culture Lunch Box at 11:10 PM