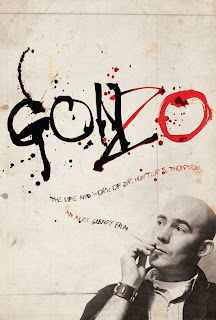 Gonzo: The Life and Work of Dr. Hunter S. Thompson tells a great story (with a stunning cast of talking heads, including Jimmy Carter) of American cultural and political life during the second half of the 20th century.

The Hell's Angels gave the young writer his first break by allowing him full access to the group (and thanking him with a good beat down). He had a huge crush on Grace Slick of Jefferson Airplane during the San Francisco 60s heyday.

When Thompson ran for sheriff, a couple of his platform stances were to change the name of Aspen to Fat City and to replace the downtown streets with sod.

Nobody had ever yet written political journalism like he had at his height as a Rolling Stone contributor. (Matt Tiabbi is following in the Gonzo tradition nowadays at the music magazine.) Thompson described Nixon as scum, claimed that Edmund Muskie was on drugs and therefore gave awful speeches, and helped Carter win with his endorsement. One of the many great video footages in the documentary is of Thomas Eagleton dripping sweat at the press conference when McGovern asked him to step down as his VP candidate because of health reasons.

Eventually, the Gonzo myth took over Thompson's public persona. He had earlier thrived as a semi-anonymous journalist, but his creativity was later stifled by his celebrity. It contributed to his eventual suicide by gun.