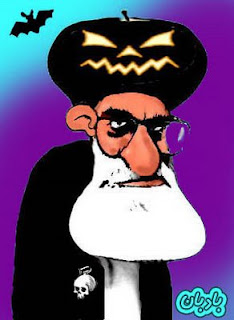 I used to wonder why all the world's ills and wars couldn't be fixed by international talks and friendly meals between leaders. And that's certainly a major part of it if the U.S., say, is ever to become friends with the Cubas, Venezuelas, and Palestines of the world.

But you also need to the will of the people to be expressed, as we're seeing in Iran following the possibly sham re-election of Mahmoud Ahmadinejad. The lack of religious leader Ali Khamenei's ability to stand up for the protesting public is yet another example of how countries remain oppressive backwaters when politics and religion mix.

The least Khamenei should do is let a recount take place. He should also step aside and go back to his place of worship to help the people who seek his counsel. That would spare the rest of the world from having to bother listening to him.

Even Ahmadinejad ruling with his crazy hate is preferable because at least the people would know who was politically in charge. There is obviously a demand for more freedom in Iran. Luckily, Khamenei's cluelessness and brutal attacks on the citizenry may unintentionally speed up that process. Then maybe talks between leaders can take place to bring Iran into the arms of humanity.
Posted by Pop Culture Lunch Box at 12:57 PM

Email ThisBlogThis!Share to TwitterShare to FacebookShare to Pinterest
Labels: Politics