Lack of PR Strategy a Fast Path to Bad CEOing 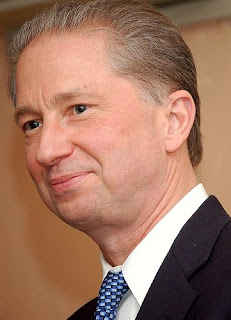 William J. Holstein of the New York Times (pictured, right) writes about how important public-relations strategies are for corporations in his 2008 book Manage the Media: Don't Let the Media Manage You (Memo to the CEO).

He offers the example of former Home Depot CEO Robert Nardelli's absence of a PR strategy leading up to his downfall. He was going to receive tough questions from the American Federation of State, County and Municipal Employees at the company's annual shareholder meeting, so he discouraged his executives from attending the meeting and imposed a tight limit on questions. 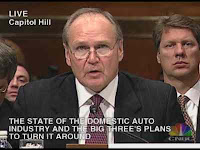 Internal and external relations counsel tried to discourage Nardelli (pictured, left) from these courses of action. He didn't listen and the media turned him into toast.

In an incident not too long after the shareholder meeting, he stonewalled Holstein during an interview. When the author realized Nardelli would look really bad once the article was published, he gave Nardelli the rare opportunity to take a look at the transcript and alter it if he liked. Nardelli stubbornly didn't alter it and the article showed that he clearly had no PR strategy behind ruling the meeting with an iron fist.

All kinds of bad things happened to Nardelli after Home Deport cut him loose, including being named "one of the worst CEOs of all-time" by CNBC, becoming head of Chrysler. and being "released" from the failing Chrysler.

This is from the first chapter, entitled "How Not to Manage the Media." Later in the book, Holstein goes deeper into what went wrong for Nardelli and other CEOs, recommends how to shape messages, and how to embrace the new media.

Recommended reading for anyone who runs a company or manages a lot of staff.
Posted by Pop Culture Lunch Box at 11:06 PM