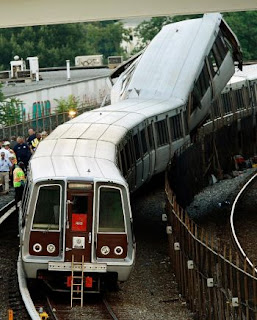 I was packed like a sardine onto a Metro train underground in the Union Station stop for about 30 minutes during this evening's rush hour. The only word we received from Metro officials was that there was a problem between Fort Totten and Takoma, a few stops up the Red Line on my way home.

Eventually it occurred to me that I had left my bike at work last Friday, so I bailed out and called Jackson's babysitter to tell her I'd be really late. She told me about a terrible collision and was very glad I wasn't on the two trains that smashed into each other.

Indeed, I was lucky not to be on either of those trains. Had I actually been on time to pick up Jackson, I might have been. As it was, I was probably two or three trains back.

The inconvenient wait was another reason to ride my bike as often as possible. The six confirmed deaths, at this point, on those trains could really hurt public-transit ridership in D.C., which has promisingly been showing increased ridership since Obama took office. Still another reason to bike.

Thanks for all the calls, e-mails, and tweets to make sure I was alright.
Posted by Pop Culture Lunch Box at 11:22 PM

Email ThisBlogThis!Share to TwitterShare to FacebookShare to Pinterest
Labels: DC