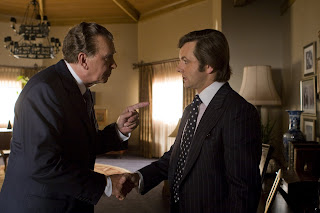 President Richard Nixon's Special Counsel Charles Colson was the ace up journalist David Frost's sleeve in getting the former president to confess to his Watergate wrongdoings.

That's the moment of great suspense and anguish on Nixon's face that culminates from two fully great hours of movie drama in last year's Frost/Nixon.

Colson (pictured right) was known as Nixon's "hatchet man" and as the "evil genius" in an "evil administration." He authored "Nixon's Enemies List" and news stories reported that he would "run over his own grandmother to get Nixon re-elected."

In 1974 he was indicted for trying to cover up Watergate. Before his sentencing, Colson became an evangelical Christian. He spent seven months in an Alabama prison and soon founded a group that examined prisoner and prison rehabilitation.

Colson is still alive and fairly active in public life, between his preaching and commentary writing for the pathetic conservative "news" site Townhall.com. One example of his ability to always be wrong is his glowing endorsement of Sarah Palin back in 2008 after John McCain had hastily named the Alaska windbag governor as his vice-presidential candidate.

Frost/Nixon isn't much about Colson. But that's a good thing because what I've told you here is all that's really worth knowing. More importantly, the Oscar-nominated movie is embellished a little bit, but its two dueling characters (Frank Langella as Nixon and Michael Sheen, who played Tony Blair in The Queen, as Frost) are excellent, which makes sense since they both already played these roles on the stage in London and New York.