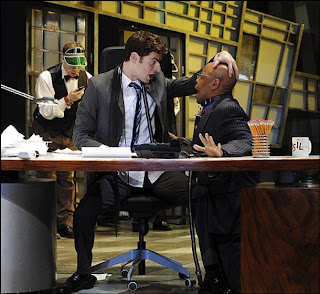 Fever/Dream might be the least-enjoyable play I've seen at DC's Woolly Mammoth Theater. It takes a 17th Century play by Pedro Calderón de la Barca about princes and monarchies and transforms it into a nonsensical corporate office environment.

Not only is the corporate version cliche (if you're going to take it on, you've got your work cut out to be better than The Office or Office Space), but the ridiculous premise isn't funny. A long-haired hermit has been locked in the basement of his father's corporation answering customer-service calls his whole life. Finally, the boss wants to retire and hand the company to his freakish captive. 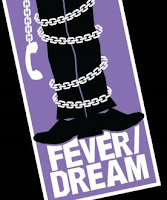 It doesn't work. And neither does the play. There are possibilities for huge laughs, but they rarely come. It almost seems like playwright Sheila Callaghan is trying to make some important statement on society about how people aren't dealt the same decks of cards and rich and powerful people live in a fishbowl. In the end, it's pretty clear what has happened and there's unfortunately not much need to discuss any of it with your fellow theatergoers.

All that said, the set is cool. The show has a large cast, which is unusual for the Woolly, and one of the blogger characters is played excellently by Lauren Ciandella, who was newshound Jane in my Fringe production last year of Wiener Sausage: The Musical! Kate Eastwood Norris and Kimberly Gilbert are hilarious and goofy and mesmerizing as always, even more impressive considering the lacking material.