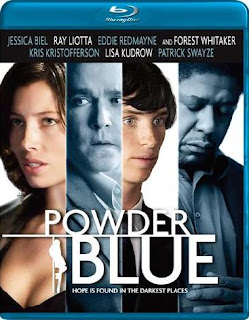 The best short description I can give about this stinker called Powder Blue is that it's Showgirls with good actors. But that may be too kind. Although the acting is dramatic and sometimes powerful, the plot tries to waver into Memento or Traffic territory by weaving all the characters' stories together on Christmas Eve in L.A.

And how can the acting be bad anyway? Forest Whitaker (whose 2006 portrayal of Idi Amin in The Last King of Scotland was one for the ages), Patrick Swayze (in a small role as a sleazy strip-club owner), and Eddie Redmayne (who, as a former fashion model, surprisingly often stars in Victorian period pieces) are strong.

While they turn in good performances with little material (some better backstories would have filled in the boring stretches), Jessica Biel provides the heat (with several stripping scenes, including one in which she splashes herself repeatedly with hot wax) but fails to convince anyone that she has acting chops. Nevertheless, we're sure to hear more from the ex-7th Heaven-star-turned-bad-girl (remind you of someone from Saved by the Bell/Showgirls?). Along with her regular appearances on Perez Hilton and other gossip sites, Biel is rumored to be making an album with help from her boyfriend Justin Timberlake. Oh boy.