Maybe this post won't be of interest to too many people. After all, I recently walked into the Montgomery County library bookstore in Rockville and asked a 90-year-old worker if they had a copy of Raymond Chandler's The Big Sleep and she replied, "That's a little old-fashioned, isn't it?" 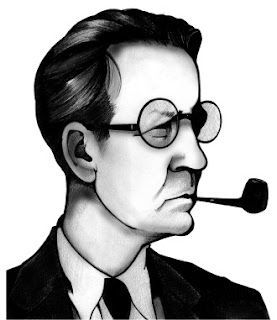 Anyway, I read the start of the classic noir novel on my Kindle and can't wait to get back to finishing it. It begins like this:
"It was about eleven o'clock in the morning, mid October, with the sun not shining and a look of hard wet rain in the clearness of the foothills." The narrator is detective Philip Marlowe, who is 33, was fired from the district attorney's office, and is a self-described "insubordinate." He's making a house call at the "Sternwood place" for a 4-million-dollar job. Upon arriving, he encounters a flirtatious girl, Carmen Sternwood, who falls back into his arms and calls him "cute" (she calls herself cute too).
Next, the butler calls Marlowe in to meet with an old man, General Sternwood, who is paralyzed from the waist down. He is a widower with two young "pretty and wild" daughters named Vivian and, of course, Carmen. She was married three times, the last time to a bootlegger named Rusty Regan, who disappeared without a word about a month previously. After describing his daughters' privileged upbringings, the old man notes that "if I sound sinister as a parent, it is because my hold on life is too slight to include any Victorian hypocrisy. I need not add that a man who indulges in parenthood for the first time at the age of fifty-four deserves all he gets."
But the business at hand is that the old man wants to tell Marlowe about how he's being blackmailed. They begin to put a plan into place ...
Posted by Pop Culture Lunch Box at 10:30 AM