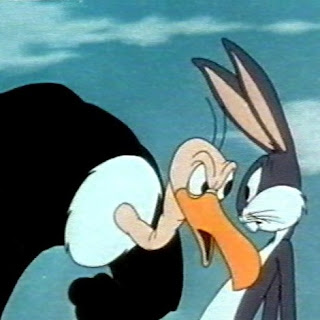 Now that my son Jackson is almost 2, he's allowed to watch short chunks of Disney and Sesame Street. And I'm more than happy to report that he is also pretty taken with Bugs Bunny, one of my all-time faves as a kid.

So I Netflixed The Looney Tunes Golden Collection Vol 1: Disc 3. Actually, I have to admit, I already watched volumes 1 and 2 just before Jackson was born, so maybe I didn't totally Netflix this one just for him.

While the disc has lots of extras, I was interested in watching the 14 shorts. Half feature Bugs, while the rest puts the spotlight on lesser characters like Pepe Le Pew, Ralph and Sam, and Marc and Pussyfoot.

There are at least four must-watches. Rent the disc just for these, if nothing else.

1.) "Bugs Gets the Boid" (pictured). This is as good as early Bugs (1942) gets. The Italian mama buzzard teaches the young and dumb Beaky Buzzard how to fly. He crashes into a clever-as-always desert bunny. They end up dancing cheek-to-cheek ("We should do this more often," Bugs deadpans), and Beaky gets hilariously embarrassed.

2.) "Haredevil Hare:" Despite the prevalence of the annoying Marvin the Martian, is undeniably one of the greatest moon landings ever.

3.) "Baton Bunny," from 1959, is the latest short in the batch, and it's from the era I probably most love. It highlights Bugs' best moves as a conductor in the pit.