Charleton Heston, Pass Me the Matza: The Big Rewind 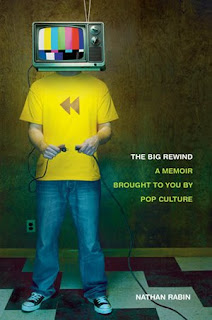 Nathan Rabin, an arts editor for The Onion, writes his memoir by how "music, books, films, television, and, to a much lesser extent, haikus, bumper stickers, and ... comic strips shaped and molded me."

The title may say all you need to know about this book. The Big Rewind: A Memoir Brought to You by Pop Culture. Rabin claims to be just another member of "my generation, a lost tribe of latchkey kids raised on hip-hop and Quentin Tarantino, a demographic for whom pop culture references constitute an invaluable common cultural currency."

Pop culture for Rabin has consistently help him escape his life-long battle with depression. Each of the book's 22 chapters begins with a pop artifact that helped define that period of his life. The first chapter, for instance, is all about the Jewish rapper Matisyahu and how he relates to Rabin's own views on Judaism, which basically amounts to nothing more than celebrating Passover Seder because Charleton Heston freed the Jews from the evil Yul Brynner.

"The Passover Seder has filled me with a sense of consistency, continuity, and stability at times when my life sorely lacked all three." For Rabin, Judaism is much more about the community formed between a cultural history that includes Woody Allen, Philip Roth, and Gershwin's "Rhapsody in Blue" than it is about the Talmud.

It's an interesting idea for a book, but it doesn't necessarily account for the fact that Rabin's life just isn't that interesting and he may well have been better suited to putting all his pop-culture references into a novel or some genre other than the memoir.
Posted by Pop Culture Lunch Box at 11:49 AM