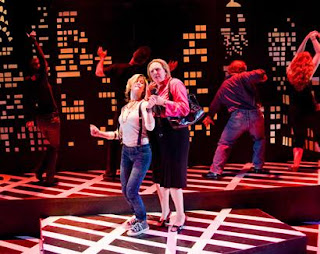 The last time I reviewed one of playwright Sheila Callaghan's plays, Fever/Dream earlier this summer at D.C.'s Woolly Mammoth, I was unimpressed. I thought she was trying to make "some important statement on society" and trying really hard to get laughs that just weren't there.

I'm not trying to pick on Callaghan, I just keep happening to see her plays. And, despite the fact that it was really cool that the playwright herself left an explanatory comment on my blog, I have to admit that I have the same complaint about the Rorschach Theatre's Dead City, running at at the Davis Performing Arts Center at Georgetown.

Actually, Dead City is slightly better than Fever/Dream. It ambitiously attempts to transplant James Joyce's Ulysses from Dublin 100+ years ago to Manhattan now. The characters mirror that great novel in Samantha Blossom as the the older Internet consultant who discovers her husband may be cheating and decides to have an adventure in the city herself. Her day-long journey ends up at a wild club with young Patti Smith-obsessed poet Jewel.

While other reviews gush over Rachel Beauregard's Jewel, I was actually most amused by Wyckham Avery's Samantha B (some allusion to The Daily Show?). She really hit all the physical humor as she both goes downhill and discovers herself as the play progresses. And her gum-chewing sex scene in a dark park with a young stranger (Danny Gavigan) is brilliantly gross.

Tim Getman's Gabriel, Samantha's cheating jazz-singer husband, also has some high moments. His cheesy love song is tossed off, making it both ridiculous and undeniably lovable. His play-ending monologue about trying to start living a more wholesome life with a traditional marriage leaves the audience with a nicely unsettling hopeful and hopeless outro.

Big-eyed Valerie Fenton and versatile Grady Weatherford also do admirably funny jobs. But in the end, the lack of a cohesive or compelling plot undoes all the actors' nice individual touches.

I suspect that a lot of what I didn't like has somehow to do with Patti Smith ... Perhaps an adaptation based on Ulysses and The Ramones is something that might work for me. And it would definitely be funnier. After all, Smith always has been a drag.