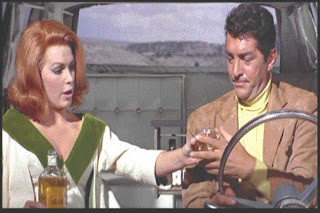 I recently read that Dean Martin's The Silencers was similar to Austin Powers and may have influenced Michael Myers' classic comedies. I wish the article would have mentioned how bad the acting and how slow the pace was in this near-turkey.

While Martin himself can't act, he is captivating, if only because his swinging, smoking, drinking, cherished lifestyle is so decadent, old-fashioned, and carefree. There are hardly any laughs (that's not to say there aren't many badly dated one-line attempts), but one moment is funny when he turns the car radio disgustedly from a Sinatra song to his own "Everybody Loves Somebody" ("now this guy can sing"). At least he can laugh at himself.

The idea is that he plays a retired CIA-like agent named Matt Helm who gets called back into duty to stop a plot to explode a radioactive bomb over the Southwest U.S. Between stumbling from girl to girl, Martin somehow stumbles into knocking off kingpin "The Big O," who figures Russia will be blamed, the U.S. and Russia will destroy each other, and he and his hapless "silencers(?)" will take over the world.

Victor Buono plays The Big O like a poor-man's Dom DeLuise, with the same cardboard bad-guyness that he had in Beneath the Planet of the Apes. The ladies of the cast are remarkably abhorrent. Stella Stevens (pictured above with Martin) turns in some facial expressions that should be outlawed and one of the worst performances I've ever seen. Daliah Lavi as Tina, Cyd Charisse as Sarita, and Nancy Kovack as Barbara look like Winona Ryder, Salma Hayek, and Kate Winslet (in other words, great) compared to Stevens.

I've definitely got nothing against old movies (this one is from 1966), but ughh!