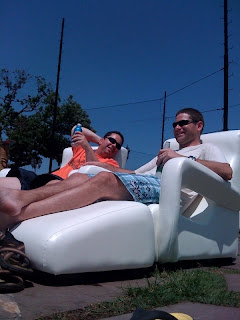 As I inevitably continue to get older, nothing seems nearly as routinely debaucherous as my annual sojourn to Osage Beach in the Lake of the Ozarks. It is there that I meet 11 old high-school/college buddies for one of my two Fantasy Football drafts each summer. They're all still living in the St. Louis area, while I come in from D.C. and Matt Wilson arrives from Salt Lake City.

This year's draft took place ridiculously early, as not a single preseason snap has occurred. That said, my team looks stronger on paper than recent years in this extremely competitive league. I got what looks to be a bevy of high-value picks. Agree? I was the 11th pick in the 12-team "snake draft" league.

Yeah, pretty sweet. But really, the whole point of this league is getting together with great friends once a year (that's Jeff Wahl and me in the photo). Sad it won't happen again for 12 months.
Posted by Pop Culture Lunch Box at 1:48 PM