Hall and Oates Have Sax With Virginia Crowd 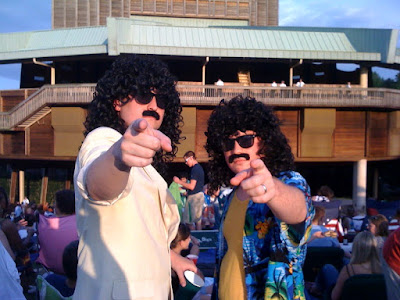 I felt like a 12-year-old again last night, reliving my first rock concert. Daryl Hall and John Oates 26 years later was certainly not as great as that 1983 H2O show in St. Louis, but it was pretty darn melodic nevertheless.

Of course Hall and Oates get a bad rap as cheesy, soft-rock-for-yacht-owner types. And there were plenty of those characters in the crowd at Wolftrap in Virginia Sunday night. (There were also plenty of big-hair 1980s non-hipsters, as witnessed by the two classy Oatesheads in the photo to the left.)

But this show wasn't about judging people. It was more about leaving your inhibitions in check and enjoying the most successful duo in rock history. Hall played acoustic guitar and keyboard and Oates played electric guitar. There were six people in the backing band, including two members from that 1983 tour, sax player Charlie DeChant and T-Bone Wolk (formerly on bass, now on lead guitar; not sure why former solist and Saturday Night Live bandleader G.E. Smith is no longer touring with H2O).

Hall and Oates are one of the few bands that could pull off a saxophone sounding so right. DeChant, in his purple suit and soft mane of hair, tore through just about every song, with particular sax highlights on opener "Maneater," a lengthy version of "One on One," and "I Can't Go for That (No Can Do)."

Wolk had several nice solos. My favorite moment in any Hall and Oates song is the short guitar break in "You Make My Dreams." Wolk played it differently than G.E. Smith, but it still had that same quick crunch and was very cool. It didn't hurt that he wore a cowboy hat and looked a lot like, from our perspective in the last row of the balcony under the pavilion, Neil Young.

The highlights of the night had to be "Sara Smile," which actually brought a tear to my eye, and the final encore medley of "Kiss On My List" and "Private Eyes."

The set list and notes I scribbled on my phone:

Maneater - Serious purple sax
Family Man - Nice T-Bone solo
Out of Touch - Great sing and clap along
Say It Isn't So - Warm club feel
How Does It Feel to be Back? - Song off Voices by Oates, a nice surprise
When the Morning Comes - Snuck down front for two songs, sounded amazing
Las Vegas Turnaround - Second song in a row off Abandoned Luncheonette
How Ya Doin Babe - Didn't know this song and not sure this is its title
She's Gone - Bustin out the Philly soul
One on One - Extended and undeniable with fiesty sax
Sara Smile - Cried in first half, rocking solo by Hall and T-Bone in the second half
I Can't Go for That (No Can Do) - Sax done right