An Inside Look at Pittsburgh? 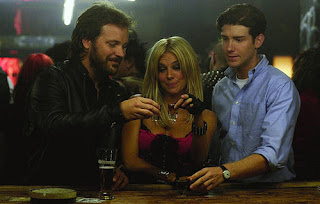 As a huge Pittsburgh Steelers' football fan, I was a little letdown by the lack of a single Black-and-Gold reference in 2008's The Mysteries of Pittsburgh. But beyond that, this is a pretty good little indie film.

Based on a 1988 novel by Michael Chabon, who's related to a couple of good friends from my condo building, it's the coming-of-age story of Art Bechstein (played by the unknown and handsome Jon Foster). As he prepares for a finance job furnished by his mobster dad (a solid and surprisingly ungrizzled Nick Nolte), he spends his last youthful summer getting mixed up with a mysterious couple played by the always-great (and born at Scott Air Force Base, a few miles from my hometown in Illinois) Peter Sarsgaard and Sienna Miller (who gossiper Perez Hilton always refers to as Slutienna Miller). While Art starts to fall for Sienna's character, he's at least subconsciously trying to ditch his psychotic, dumb, nympho "girlfriend" Phlox, played humorously by Mena Suvari.

There may not be a lot of Pittsburgh in the movie, but there sure are a lot of twists and romantic entanglements. Worth a watch.