Julia Child Doesn't Cut Off Her Finger in Julie & Julia 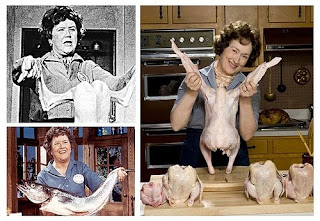 My fondest memories of the lovable master chef Julia Child were produced by Dan Ackroyd on Saturday Night Live when I was a kid in the 1970s.

So when the bloody skit in which he cuts off his finger is slapped down in the middle of the new movie Julie & Julia, it's understandably my favorite part.

But the rest of the film is excellent as well. Meryl Streep probably deserves to win the Academy Award for her portrayal of Child, wonderful voice and all. It will no doubt be her 16th nomination at the least. Amy Adams, who is beginning to compile quite an impressive resume herself, will also likely be nominated for either best actress or best supporting actress. Stanley Tucci as Julia's husband, Paul, is no slouch either.

This is the first movie about the life of a blogger, and for a while in the middle, I was thinking Amy Adam's half of the movie was unnecessary and it should have strictly been a portrayal of the life of Julia Child. But I warmed up nicely to Adams' sometimes-narcissistic blogger, who's hook was that she cooked the 524 recipes in Child's Mastering the Art of French Cooking in a year. This drives her boss and husband crazy at times. And curiously, in real life, Child apparently heard about this blog before her death and didn't think highly of it, which seems hypocritical and very unlike her loving and fairly racy personality.