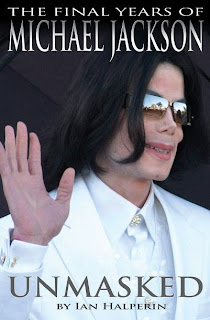 Ian Halperin is the New York Times' writer who caused a minor uproar last December when he reported that Michael Jackson would be dead in six months. Jackson's official spokesperson, Dr. Tohme Tohme, called the report a "total fabrication" and that the singer was in "fine health."

"Most of the media took his word for it and the feeding frenzy came to an abrupt halt. Six months and one day later, Jackson was dead." This is detailed in the just-released book, Unmasked: The Final Years of Michael Jackson, by Halperin.

Halperin, you may recall, made his name several years back after another big-time musician died. Official investigations found that Kurt Cobain had killed himself, but Halperin had spoken with "a number of people who had known Cobain, including one of his heroin dealers and his best friend, who told me that everything was not as it appeared. They were convinced that ... he had been murdered."

Looking into what he still believed to be a conspiracy theory, the author later discovered that Kurt's wife, Courtney Love, had hired a Beverly Hills private investigator right before his death until several months later, when he abruptly quit and publicly accused Love of murdering her husband.

Back to Jackson, Halperin initially reported, at the end of 2008, that the singer had a "potentially fatal genetic condition and that he could barely walk." Further, the next photos released of Jackson showed him "being pushed in a wheelchair and wearing a surgical mask."

There's all kinds of juice for Jackson-heads in this whopper of a book (which immediately shot to number 1 on the New York Times best-seller list). His ever-changing facial features were designed to make him look like Diana Ross. After he and Ross had a falling out, he changed course to look like Diana, Princess of Wales. Jackson was indeed very much inclined to child molesting. He also had at least two long-term love affairs with other men. Etc.

For those who want a rollicking read, this (along with Halperin's personal Web site) is a real thriller.
Posted by Pop Culture Lunch Box at 3:58 PM