A Perfect World: One of Clint Eastwood's Underrated Films 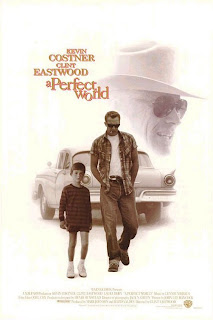 I've been on a Clint Eastwood kick lately, much like I was around the time I was 16 or so and watched all the Dirty Harry movies, especially loved Escape from Alcatraz, and determined he was my favorite actor.

So I realized that A Perfect World, from 1993, was one of the few Eastwood movies I hadn't seen. It's the tale of two convicts who escape from a Texas prison in 1963. One is a real idiot and doesn't last long outside the prison walls, but the other turns out to be the complicated Robert "Butch" Haynes, played perfectly by Kevin Costner, who clearly still had his acting chops after a tremendous run of roles between 1987's The Untouchables and 1991's JFK.

In A Perfect World, Costner's Haynes doesn't seem like that bad of a person (although part of the drama is sometimes not quite knowing whether this is true). The main draw to this Eastwood-directed winner is the relationship Costner builds with the young Jehovah's Witness he kidnaps (played by T.J. Lowther, who never played in any other good movies). The two form a bond that supplies considerable drama.

The weaker part of the movie, surprisingly, is the manhunt, led by Eastwood as Texas Ranger Red Garnett. He is one of the reasons Costner's character was imprisoned in the first place, for relatively minor crimes. It turns out that both Costner and Eastwood's roles have huge soft spots underneath their hard-boiled surfaces. Much of Eastwood's soft side is coaxed out by Laura Dern, who is appointed to the manhunt by the governor's office.