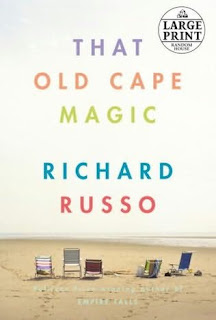 It's always good to see someone from one of my alma maters hit it big. And in author Richard Russo's case, really big. The Pulitzer Prize novelist was teaching English at Southern Illinois University Carbondale when his first novel, Mohawk, was published in 1986, just two years before I attended that school for my freshman year of undergrad.

Sweetening the deal, Russo is originally from Gloversville, a depressed town in the southern New York Adirondack Mountains that was the proud home of where most of the world's gloves were produced before the factories shuttered and moved to Italy. My family has some houses on nearby Lake Sacandaga, and Cousin Paul knows all the stories about Gloversville and Russo's upbringing there. 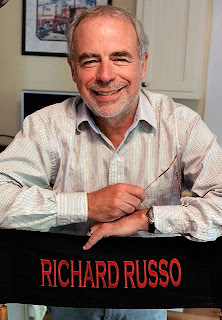 But I digress. I started reading Russo's new book, That Old Cape Magic. It's about 57-year-old Jack Griffin and his wife Joy, who are planning a trip to Cape Cod, where Jack spent his summer vacations as a child, for their daughter Laura's best friend Kelsey's wedding.

The novel intertwines Jack and Joy's life with those of Jack's parents, who led miserable lives as professors in the "Mid-fucking-West" 11 months of the year. The only happy part of their years together was the one month each summer spent vacationing on the Cape.

His parents both grew up in western New York State, went to graduate school at Yale, and then went to where they could get collegiate teaching jobs in the same place, which was "a huge state university in Indiana." Both were serial adulterers before divorcing. She remarried a philosophy professor at the school named Bart and he married one of his former graduate students named Claudia.

Back in Jack and Joy's generation, Joy has sisters June and Jane and "idiot twin brothers" Jared and Jason. Also of note in the early pages is that Jack carries around his father's ashes; he, Joy, and Laura spent some time in L.A. where he worked as a screenwriter before they both got jobs at an elite New England college; and his mother seems to take out her frustration at his success by requesting that he find books and journal articles in the school library to bring to her at her assisted-living facility.

I'm not yet willing to wager that That Old Cape Magic is as classic as 1988's The Risk Pool (which is apparently being developed into a movie starring Tom Hanks), but I'll definitely get back to reading this one, which is promising Russo's usual great characters, cutting humor, and intertwined families.
Posted by Pop Culture Lunch Box at 10:03 PM