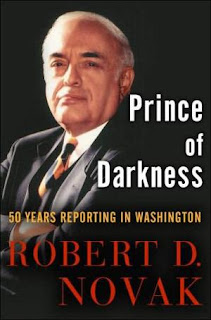 Robert Novak died the other day. I always despised this D.C. talking bobble-head, but now that he's officially been silenced, it seems like a fitting time to mark the occasion by reading as much of his book, Prince of Darkness: 50 Years Reporting in Washington, as humanly possible. Here are a couple of highlights from the early pages ...

I didn't really care to hear Novak's side of one of his most defining moments, the mid-2000s Valerie Plame CIA scandal. He goes on for several pages making excuses for becoming a central figure in the saga. Playing onto this drama, Novak says his close relationship with the evil Wizard of Oz Karl Rove was "built on self-interest, [which is] the rule in high-level Washington journalism, though journalists seldom are as candid about [this] as I will be throughout this book."

But I have to admit, Novak's writing is pretty snappy when he kicks into chronological autobiography mode. Perhaps I was enjoying the book because his early career paralleled my own quite a bit. He started out as a sports writer because he couldn't play any sports well himself (I was pretty good at soccer, tennis, and baseball, on the other hand). He even mentions the Centralia (Illinois) High School Holiday Tournament, which I covered for the Centralia Morning Sentinel for two years in the mid-1990s.

As a sports reporter at the University of Illinois' paper, he got his first taste of politics when he was beat out of becoming sports editor. "It taught me that politics for me was a lot like sports. I was a lot better reporting it than practicing it. I am not a person who is easy for a lot of people to like. No stirrer-up of strife is ever very popular." Again reminding me of my sometimes-toxic-to-the-locals writing in Centralia.

Novak got his first breaks working at the Omaha and Indianapolis bureaus of the Associated Press before being assigned to Washington D.C. in 1957, with the goal of breaking stories "nobody else had and explaining what was really happening behind the scenes." Political reporting, he says, "took more elbow grease and chicanery than cerebral brilliance." He got many scoops simply because he was single and hung out with lobbyists, legislative staffers, and secretaries, while many other journalists along his route were married and home in bed.

The writer goes into his formative ideology by noting how ineffective politicians are and his disdain for organized labor unions. He also discusses the differences between Washington D.C. in 1957 and now (then it had a sex zone on 9th Street, no "New York-syle posh restaurants," and a powerful men's-only hangout in the National Press Club).

Seems like a surprisingly good read if you want to figure out how the right-sided Beltway-journalist mind works. Definitely a mystery worth trying to unlock ...
Posted by Pop Culture Lunch Box at 2:12 PM