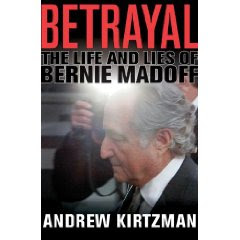 To the many people like Steven Spielberg and holocaust survivor Elie Wiesel whom Bernie Madoff made rich, they looked at him with awe. Nearly 5,000 clients lost money in the crook's dirty investment scheme, and many are now penniless and even homeless. Some have committed suicide.

The story is dramatically told by former New York Daily News city hall reporter Andrew Kirtzman in the new biography, Betrayal: The Life and Lies of Bernie Madoff. I don't feel a need to read the entire thing, but there are lots of interesting tidbits in the opening pages.

-- "In his telling, Madoff was a good man who got into trouble late in his career and couldn't get out of it. [But] the facts point to his launching his criminal operation when he was in his twenties."

-- "Madoff bore scars that few knew about. His parents ran afoul of the law with a shadowy stock trading operation run out of the Madoff home."

-- "Time and again as a kid, he was spurned and humiliated for what was perceived to be his inferior intellect."

It seems the stories about Madoff won't end with this book. The financial pages continue to be a great source for almost laughable tales of his monumental fall, including the troubled auctioning of his "cheesy" house in Florida, his wife Ruth's degree of guilt and attempts to hold on to some of her fancy possessions, and Bernie's Native American sweat-lodge sojourns in the penitentiary.

Fascinating and sad.
Posted by Pop Culture Lunch Box at 12:32 AM