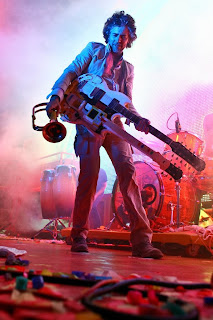 The final day at Chicago's Pitchfork music fest this year appeared to be all about the carnivalesque magic of The Flaming Lips. While I (somewhat controversially) think their best music is far behind them, their live show continues to be among the best in the biz.

Thanks again for my friend Francis Chung offering up his professional rock photogs to my blog. His work, including these pictures, are regularly featured at Pitchfork's authoritative indie-rock Web site. Also see my posts about his work at the festival on Day 1 and Day 2.

Now, to get you really talking, here is my ranking of The Flaming Lips' official releases. As you can see, I'm a big fan of their mid-period, psych-pop stuff, and I would add that the top 5 here are must-own classics. The rest are more for the die-hards: 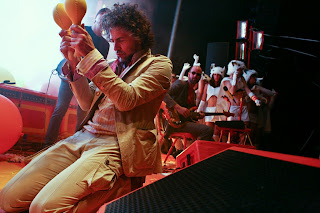 Where will the soon-to-be-released Embryonic fall in the list? And how would you rank the Lips's albums?
Posted by Pop Culture Lunch Box at 1:32 PM