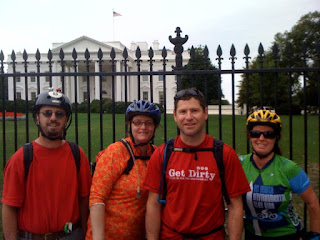 I didn't do anything as amazing as this video today, but I did ride in the D.C. WABA 50-states bike trek. Only made it through 36 of the 65 miles because I was with a slowish but fun crew (pictured left). We hit exactly half of the state streets, meaning 25 (see the route map below).

Highlights included when Lindsey steered us to almost missing the very first state street (California), spotting the House of Scientology on 19th Street NW, enjoying the city's many smells, and debating whether we were witnessing a drug deal or prostitution near New York Avenue and 4th Street NW. Luckily, we missed another turn and, as we rode back by the quarreling man and woman, the crack pipe they were smoking settled our argument! 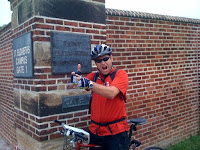 We also got to see St. Elizabeth's Hospital in Anacostia, where infamous Ronald Reagan assassin John Hinckley has been held for nearly 30 years.

Speaking of Anacostia, I don't get over to this Southeastern portion of D.C. much, but it perhaps gets an unfair reputation. Sure, there are plenty of murders and crime is rampant, but there really are some lovely neighborhoods and parks and some friendly people. It was great to bike there for the first time (other than past rides in and around Anacostia Park) and really absorb the atmosphere.

Urban biking, to me, is the second best type to mountain riding. I can't wait for another ride following my cue sheet for the 25 states we missed out on, and also the 13 colony-street ride. Then I need to do the ride I thought of many years ago: riding to all of D.C.'s many fascinating statues and monuments.